"Prince of the Forest"

Prince Ian or the Prince of the Forest is a major character in the second season of Princess Gwenevere and the Jewel Riders, introduced in the titular episode "Prince of the Forest". Voiced by Bob Kaliban, he was originally designed as Tamara's boyfriend, inspired by the Beast character from Beauty and the Beast, and later himself inspired the character of Lorren in Avalon: Web of Magic.

Ian is a towering, stunningly handsome young man who harbors a terrifying secret involving a missing Wizard Jewel. He is the protector of Arienda who becomes Drake's rival for the heart of Princess Gwenevere in the second season of the show after his encounter with the witches and their followers. As a sworn defender and champion of the Princess, Ian becomes a key ally of the Jewel Riders when he arrives to aid Gwenevere in her final battles to free Avalon of the evil magic.

"I have pledged my heart to you, Gwenevere. I am yours to command!"

Ian is introduced halfway through the second season as titular character of the episode "Prince of the Forest". He is really a huge, humanoid wolf known as the Beast using the magic of a Wizard Jewel, the Jewel of Arden, to appear human. The Beast is the protector of the faery wraith queen Arienda ever since he lost "his one true love" many years ago. When Princess Gwenevere first meets him in the Forests of Arden, he follows Gwen and appears to her as a very tall, muscular and good-looking but also very mysterious boy that rescues her from a mud hole. The Princess gives him a human name of Ian as both she and him fall in love for each other, and later she saves him in turn from a bear trap in his real Beast form, without recognizing him. Ian speaks a very broken human language in his new human form at first, but becomes quite fluent later.

Later, after Gwenevere she again saves him from an attack by the Outlaws, Ian is soon captured by Gwen's evil aunt Lady Kale who wants his Wizard Jewel and uses Arienda as a bait to lure him into yet another trap. But when Kale and Morgana also attack Gwen, the enraged Ian turns into the Beast and trashes the Outlaws' camp after the other Jewel Riders save him by deflecting an arrow from the giant crossbow that was specifically made against him. The Outlaws flee as he goes after Kale and Morgana, but the latter get away by the Dragon Wagon so he runs off to chase after the former. Afterwards, Ian agrees to give up his jewel to Gwen despite his fears of losing his love afterwards. The Princess of Avalon entrusts him to protect the magic of the faery wraiths. They then dance, kiss, and promise to meet there other every year when the magic of the faery wraiths would let him become a human. 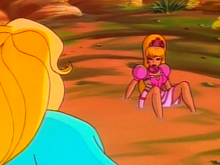 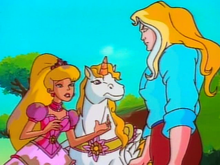 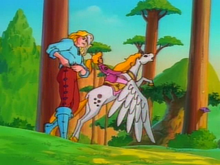 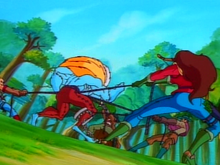 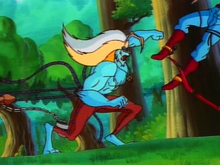 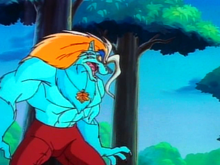 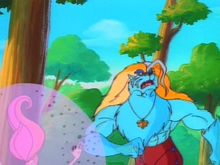 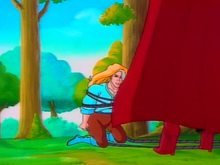 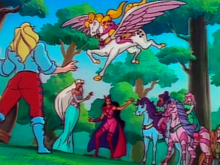 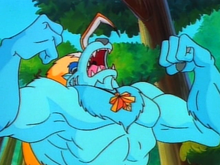 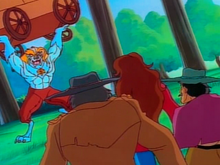 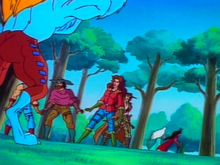 Ian returns in the show's final episodes. In "Lady of the Lake" ("Spirit of Avalon"), Ian comes to rescue of his Princess at the last moment from Lady Kale and Morgana, who uses the Staff of Avalon to call upon him to aid her. Ian teleports into the crystal henge at the Heart of Avalon, the Jewel of Arden back around his neck for a moment, and sends two extremely powerful magical blasts from the jewel to rescue Gwen (who comments: "With you by my side, I know we can win!") and again assumes his human form. He (in the beast form in the original script, in the human form in the show) then assists his love in defeating her evil aunt for ever, after which he safeguards the dangerous Dark Stone that Kale wielded. Impressed, Fallon also becomes "definitely interested" in him.[1]

When helping the girls during the final contest for each of the Wizard Jewels against Morgana in "The Last Dance" ("The One Jewel"), Ian helps them in the fight in his Beast form and then actually sacrifices his life for Gwen during the struggle for the Time Stone. But soon the Princess manages to revive him with a kiss and "the magic of love", at the same time also restoring Arden that had been just destroyed by Morgana, and winning the Jewel of Arden. In the end, together with the Jewel Riders and the Pack, Ian helps Merlin rid of Morgana and the ancient wizards once and for all. The very last scene shows Gwen and Ian (still in human form even without his jewel) holding their hands while looking in each other's eyes.

Ian's original concept was this of a character known as just a Prince. However, his name had to be changed due to copyright reasons.[2] According to creative director Greg Autore, "this new character was to be a suggested love interest for Tamara with her affinity for animals. It was a prince who was trapped by dark wild magic to take the form of an animal."[3] For the canceled third season, "Ian was supposed to be Tamara's love. She always loved animals so I gave her a boyfriend that was also an animal. Yes, it had obvious influence from a certain beast."[4] Concept art shows him wearing a fur jacket and blue pants (turned red in the show) with a green belt he would carry his jewel on, instead of around his neck.

Ian has been named Ranger in the show's known draft scripts, described therein as following: "He is tall with long rusty hair and a blonde streak (Fabio meets Tarzan)." The Beast was also not wolf-like in these scripts, but was instead described as a bear creature.[5] The magic sparkle between Ian and Gwen on their first touch is similar to on the first meeting of Lancelot and Queen Guinevere in Arthurian legend. He was originally voiced by Bob Kaliban, dubbed over by Christian Stark in German.

In Avalon: Web of Magic, the nonhuman character Lorren goes by the alias "Forest Prince" and is also one of love interests of Gwen's analogue character Kara Davies, as is the blonde warlock named Donovan. Another prince character from Aldenmor, Marlin, is also a love interest of Emily.

Retrieved from "https://starla.fandom.com/wiki/Ian?oldid=25038"
Community content is available under CC-BY-SA unless otherwise noted.