The Jewel Riders are the three eponymous main characters of Princess Gwenevere and the Jewel Riders. The series' protagonist Princess Gwenevere (Starla) leads her fellow Jewel Riders, Fallon and Tamara, under Queen Anya. They later inspired the protagonists of Avalon: Web of Magic. They were renamed as the Chevaliers de Joyaux / Chevalier d'Avalon (Jewel Knights / Knights of Avalon) in French, as the Kristallritter (Crystal Knights) in German, the Cavalieri di Avalon (Knights of Avalon) in Italian, and as the повелители камней (Masters of Stones) in Russian.

The Jewel Riders are an elite team of teenage defenders of the kingdom of Avalon, tasked by the good wizard Merlin with maintaining the balance of magic for the good of all. They are paired with their animal special friends for the use of Enchanted Jewels that are bonding the girls with their unicorn mounts in the Circle of Friendship, giving the the Jewel Armor and various special powers unique to their jewels and personalities. The girls are to be the champions of Avalon, who may save the day when the magical kingdom needs them most. They are based in the Crystal Palace with their male partners known as the Pack.

Now in the time of a great wild magic crisis caused by Anya's wicked sister, Lady Kale, the future of Avalon is indeed in their hands. Together with the talking owl Archimedes on their Jewel Quest, the girls and their friends need to use their magic and friendship to stop the cruel Kale from taking control of the magical Crown Jewels and gaining power, and to save their wizard mentor and all of the kingdom. But Kale knows of their mission to ruin her plot to rule Avalon and she is not going to let their adventures be easy. In the second season, after 1,000 years of imprisonment, the great dark wizard Morgana is again spreading her evil. To prepare for her return, she sends Kale to find the even more powerful Wizard Jewels. The Jewel Riders will need to recover these jewels and defeat both Kale and Morgana for good.

"Onward, Jewel Riders! For the glory of Merlin and Avalon!"

For many generations, young people and animals have felt the wonder and joy of receiving an Enchanted Jewel in Friendship Ring through the ceremony known as the Circle of Friendship. The lucky youngsters who are chosen to bond with an animal and become Jewel Riders, train with their animals under the tutelage of the adult leaders. A thousand years ago, the great wizard Merlin found a set of special Enchanted Jewels which he assigned to teenagers and magical animals. These Enchanted Jewels allow them to communicate, and to live and work together as best friends. Belonging to the Jewel Riders means being part of an heroic group and channeling magic for good deeds.

Under the tutelage of Merlin, each animal/human team learned to tune their jewel to their own attributes and strengths, making the power of the jewel uniquely their own. Merlin taught the young people and their animal friends to use their Enchanted Jewels and become Jewel Riders to ride the Wild Magic and monitor the lands, using Travel Trees to travel across the wild magic to other parts of the kingdom of Avalon. To deal with the unpredictable nature of the Wild Magic, protective clothing (the Jewel Armor) and equipment will be necessary for the Jewel Riders on their fantastic journeys through the astral planes of the magical networks.

In the show Edit

In the series' prologue, Merlin, now trapped within the wild magic, has instructed his best students, three teenage girls and their animal friends, on the great Jewel Quest. They are forced to use their unproven skills and the newly received Enchanted Jewels against the unstable wild magic and the even more dangerous dark powers of Lady Kale, Anya's rogue sister and former Jewel Raider trainee turned an evil sorceress, whom they must defeat before she can steal all of the magic powers of Avalon from Merlin to keep them for herself to rule all forever. Only the Jewel Riders stand between Kale and the total domination of Avalon. Their individual Enchanted Jewels are no match for Kale's Dark Stone, but their special bond with their animal friends and each other allows them to save the day time and time again.

As the series begins, Fallon and Tamara are already Jewel Riders, and they are soon joined by Gwen and Merlin's owl Archie on a mission to eliminate wild magic outbreaks and rescue Merlin. The Jewel Riders are going to travel the kingdom looking for the Crown Jewels and restoring Avalon to order. In doing so, they are going to have many adventures and accomplish many good things. Relying on their friendship, the girls have to learn the magic of their Enchanted Jewels to be able to bring Kale's plans to an end.

The Jewel Riders find out that not only Kale has survived but they now have to face also the even greater threat—Merlin's arch-rival, the evil queen Morgana, who too is back for revenge. And so begins their new Jewel Quest, this time for the Wizard Jewels of the ancient wizards. The girls are going to need to master their new magic powers that are now much greater than before, and make many new friendships, before they can have a chance to get rid of Kale and Morgana and free Merlin, finally restoring peace in Avalon and harmony in the magic.

Fallon
(and Kale in Anya's dress) 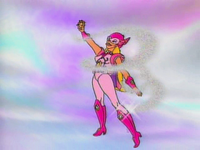 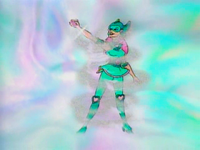 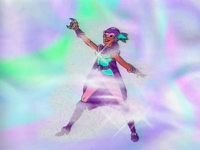 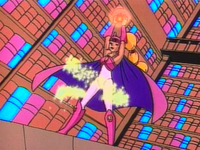 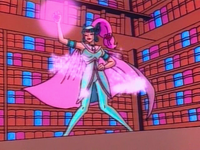 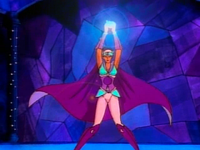 Season 2 armor transformation
Add a photo to this gallery

The three Jewel Riders inspired the protagonist characters in Avalon: Web of Magic: Kara (Gwen), Emily (Tamara), and Adriane (Fallon). The Jewel Riders-like magic users in Avalon are known as mages, defined as a "human user of magic who has at least one magic jewel and at least one bonded animal":

"A mage may be lucky enough to bond with a magical animal, developing a relationship that enhances the ability to use magic. Being befriended by one or more of these magical animals is a very special gift. Magical animals ground mages, giving them a balance to use magic properly. Once a connection is made, the bond remains forever."[1]

The fairy band Be*Tween is also (more loosely) based on the Jewel Riders. Even most of their songs (besides "Supernatural High" and "Golden") have been originally used in Jewel Riders.

Retrieved from "https://starla.fandom.com/wiki/Jewel_Riders?oldid=25270"
Community content is available under CC-BY-SA unless otherwise noted.