Tamara (Lady Tamara[1]) is one of the protagonist characters and titular heroines of Princess Gwenevere and the Jewel Riders, voiced by Laura Dean. Tamara-centered episodes include "Song of the Rainbow", "Home Sweet Heart Stone" (where she sings "Heartland Farm"), "Shadowsong", and "The Jewel of the Sea". Her later inspired the character of Emily in Avalon: Web of Magic.

As a Jewel Rider, Tamara uses the ruby-red Heart Stone, the Stone of Healing, which also allows her to talk to all animals. Practical, wise, and gorgeous, Tamara is a musician and songwriter who works in tune with the music of nature and animals. She is also the Head of the Crystal Palace's magic animal nursery, and is responsible for raising the baby animals.

Tamara is a daughter of Doc and Charity from Heartland Farms, and a close friend of Archie the talking owl as well as of her fellow Jewel Rider, Fallon, with whom she sometimes rides on Moondance. She was a special student of the wizard Merlin because of her exceptional musical abilities. Tamara's gift of music and compassion for all living creatures inspires the powers of the Enchanted Jewels, and so she pledges to Merlin she will help her best friend Princess Gwenevere learn to use the Sun Stone. In the second season, Tamara becomes bonded with the unique unicorn named Shadowsong, sharing her jewel with him and being able to call upon him to arrive anytime.

In the show Edit

The young Tamara is already known through the kingdom of Avalon for her strikingly good looks. She is shapely, slender and graceful—no matter what she eats, she never becomes fat (which is a constant annoyance to her friend, Princess Gwenevere). She is the youngest but already the tallest of the three current Jewel Riders.

Tamara has an adventuresome spirit and her good-natured, well-mannered ways and irresistibly winsome character make her very easy to like. She is sensitive, compassionate, perceptive and capable of intense concentration, exactly the temperament and personality to learn the crafts of music and magic. She is straight-forward, honest and expresses herself eloquently through her music and other artistic endeavors. But when Tamara is involved in her music and magic, she gets dreamy and tends to forget everything else, becoming caught in the music's spell.

Tamara is very wise, and spiritual, yet sensible and down-to-Earth, and possesses a homespun philosophy that gives her a practical wisdom and perceptive instinct—she is the one the others can go to for advice and kind words of reassurance. Now, like her friends, Tamara is dedicated to saving Merlin and all Avalon from the evil Lady Kale. With Merlin's absence, she spouts the philosophy of Merlin's teachings even though she may not fully understand their meanings.

She has an especially good relationship with her fellow Jewel Rider, the warrior-tomboy Fallon. During the first season, Tamara always rides with Fallon on Moondance instead with Gwenevere on Sunstar. Tamara's and Fallon's close friendship comes from both having been novice Jewel Riders together before Gwen became one.

Tamara is a natural artist and poet. She sees the world through eyes filled with childlike wonder and expresses the beauty of what she sees with her gifted artistic abilities. Because of her abilities with music, Tamara has a natural talent for making good magic—Merlin knew this and made her his special apprentice. She has an especially strong talent for song-writing and music, and the Fortune Jewel predicts she is "destined to be the most famous musician Avalon has ever known."[2] Her instruments include a flute, a violin, and a small harp.

As part of Tamara's responsibilities, she searches the world for baby animals that have the right resonance for an Enchanted Jewel—if the baby shows potential, it is brought to the nursery where Tamara looks after it. In the nursery, she raises and trains the baby animals. Eager to show their stuff, the Babies tend to be pesky troublemakers and can cause quite a ruckus. Tamara possesses tremendous self-control, tolerance, and patience in dealing with them. Her remarkable relationship with the baby animals is becoming legendary throughout Avalon. She has been dubbed the "Pied Piper" because the Babies and other animals will follow her anywhere to hear her sing.

Tamara always took her magical studies very seriously. Her empathetic abilities are now enhanced by the Heart Stone, allowing her to sense the emotions of humans and animals. She can sense when animals are in need of help and rushes to their aid. Any animal Tamara comes in contact with, can sense the girl's strong personality, emphatic vibes and her great love for all living creatures.

Tamara is very good at singing and proficient in nearly every instrument, and always carries a flute. Her Heart Stone is furthermore able to amplify and enchant any music. As part of her duties for Gwenevere's mother, Queen Anya of the Crystal Palace, Tamara travels by her Crystal Carriage to many towns and villages spreading joy and good will through music. This is fine with her because she wants to discover the music that exists everywhere—all of nature has music and sound that can be used to expand the goodness of the Crystal Palace. 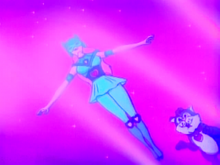 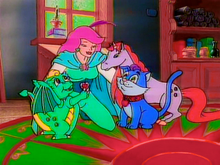 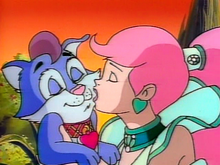 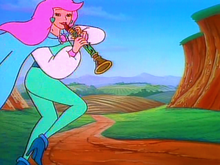 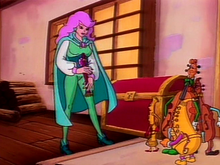 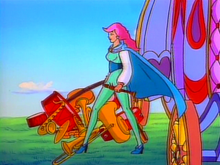 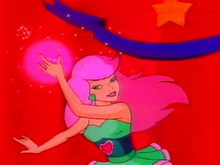 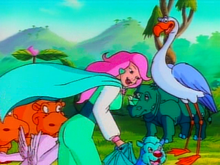 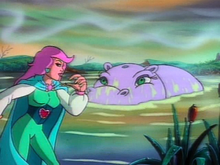 Lady Tamara wears a very special Enchanted Jewel, the ruby red Heart Stone, a stone of healing. With Tamara's sensitivity and natural empathetic connection with animals, she is able to use the Heart Stone in extraordinary ways. However, she it also makes her vulnerable to the wild magic.

The Heart Stone is a wild crystal which makes it difficult and erratic to control. Tamara's natural musical abilities and strong compassion for all living creatures help her focus the Enchanted Jewel to help those that need aid. She can use her Heart Stone to heal living beings, which can be magnified by an Enchanted Jewel Circle with other Jewel Riders to revive. She also can put a protective force shield dome around her and others nearby.

Tamara can use the Heart Stone to talk to all magical animals, in the same way Merlin does. She can also sense which animals can bond with a lucky youngster and join the Jewel Riders. Sometimes, when her Enchanted Jewel is working just right, Tamara can use it to sense what animals sense, see through their eyes, hear through their ears and smell what they smell. Although she is strong, the depth of these powers could overwhelm her if she is not careful.

In the second season, Tamara eventually shares the Heart Stone with the special 'zebracorn' unicorn whom she names Shadowsong after they rescue each other and get bonded in his titular episode. Shadowsong and Tamara are an unique Jewel Riders pair in the show as they are the only among them to be paired male-with-female (the evil Kale also shares her Dark Stone with her male dweasels). With his special ability of entering the Wild Magic at will, Shadowsong can be summoned by Tamara at any moment from any location in Avalon and elsewhere. 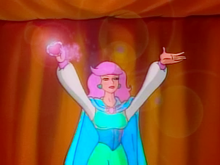 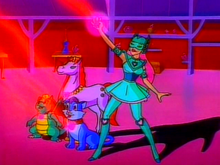 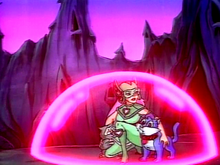 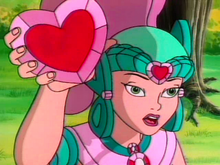 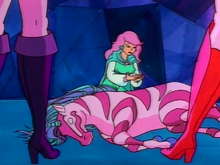 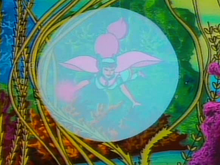 Tamara comes from Heartland Farms in the Great Plains. She is the youngest child of the caring farmers Doc and Charity, and was raised with a farm full of animals—which makes her connection with them that much more natural and comfortable. She visits her parents often, usually with an armful of baby animals for her mother to love and cuddle. Tamara's lovely beauty grants her many young suitors, such as Sorrel. Even Drake, the handsome leader of the Pack in love with Gwenevere, has a crush on her and thus always strives to protect her from dangers. Tamara and Drake are seen on a date in "Dreamfields".

Friendly animals just seem to sense Tamara's love for all good living beings. She loves to talk to her parents, and is always excited to share her constant activities that includes studying, writing music, performing, exploring, and baby animal wrangling. During the first season, before meeting Shadowsong, Tamara was accompanied by Merlin's familiar owl Archimedes (also known as Archie) and usually would ride with her best friend Fallon on Moondance when not driving the Crystal Carriage with the Babies. She also rode on the great wolf Stormrunner in "For Whom the Bell Trolls". And, unlike Fallon, Tamara always gets along with Gwen. 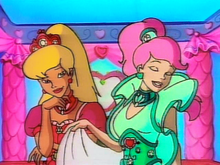 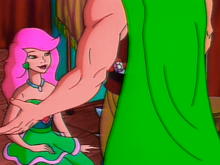 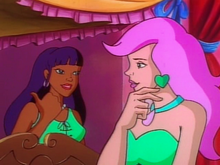 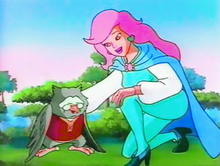 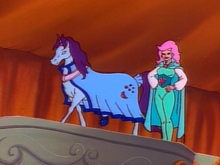 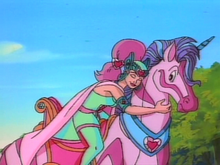 As a Jewel Rider, Tamara's magical armor represents her love of nature. The helmet symbolizes a butterfly to signify her respect for nature's eternal innocence and ever changing beauty.

Tamara usually wears eye-catching, form-fitting bodysuits, mostly in the shades of green with pink elements, and often with a miniskirt. For formal affairs and parties, she prefers elegant dresses of classic beauty rather than frilly fashionable flavors that may be in today and out tomorrow.

Tamara was portrayed by Laura Dean. She was dubbed by Kristina von Weltzien in German, Valérie Siclay in French, and Cristina Cavalinhos in Portuguese.

Tamara's powers might have been inspired by these of She-Ra.[3] In some early drafts of the show, including in the original project to adapt Dragonriders of Perm,[4] Tamara has been named Melody[5] (pictured) and later Harmony,[6][7][8] while her parents have been named May and Orvan.[9] Her light skin tone was intended to contrast with these of Fallon's and Gwenevere's and evoke an image of an Irish princess, but her hair color was changed from red to pink.[10] An early prototype of the character (with brown hair and a brown costume) can be seen in the image on the left, along with some early versions of Archie and the Babies (including an eventually removed wolf pup). For the canceled third season,Tamara would "had a shield that would fan out from her gauntlet in segments. She was always more concerned with nurturing and protecting so that feature fit her the best." Tamara was also "to be given some power over snow and ice for an episode."[11]

According to art director Greg Autore, the character that would become the werewolf known as Ian had been originally "to be a suggested love interest for Tamara with her affinity for animals. It was a prince who was trapped by dark wild magic to take the form of an animal. Ian was supposed to be Tamara's love. She always loved animals so I gave her a boyfriend that was also an animal."[12] He also said about Tamara herself: "Pink was a cuter way to depict a red-head. It also gave me two pink characters – one with pink hair and one with pink clothing - Win/Win!" Her name was first changed because Melody was trademarked in the United States.[13] The original idea for Tamara's own special animal friend to ride on was an elk, already in the first season, but the series creator and director Robert Mandell hated it.[14]

In Avalon: Web of Magic, like Tamara served as an inspiration for the character of Emily Fletcher.[15] Emily lives with a veterinarian (a combination of Tamara’s parents) and cares for a lot of animals. Both Tamara and Emily also both play flute, though Emily plays a concert flute while Tamara plays a recorder-like instrument. (The concept of using music and lyrics to amplify magic and create magic spells has the name in Avalon, known there as spellsinging.)

Tamara's winter outfit in the show 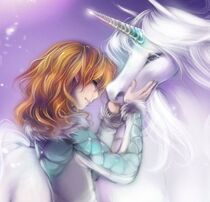 Emily in Avalon: Web of Magic

Avalon's Emily
Add a photo to this gallery

Retrieved from "https://starla.fandom.com/wiki/Tamara?oldid=25803"
Community content is available under CC-BY-SA unless otherwise noted.